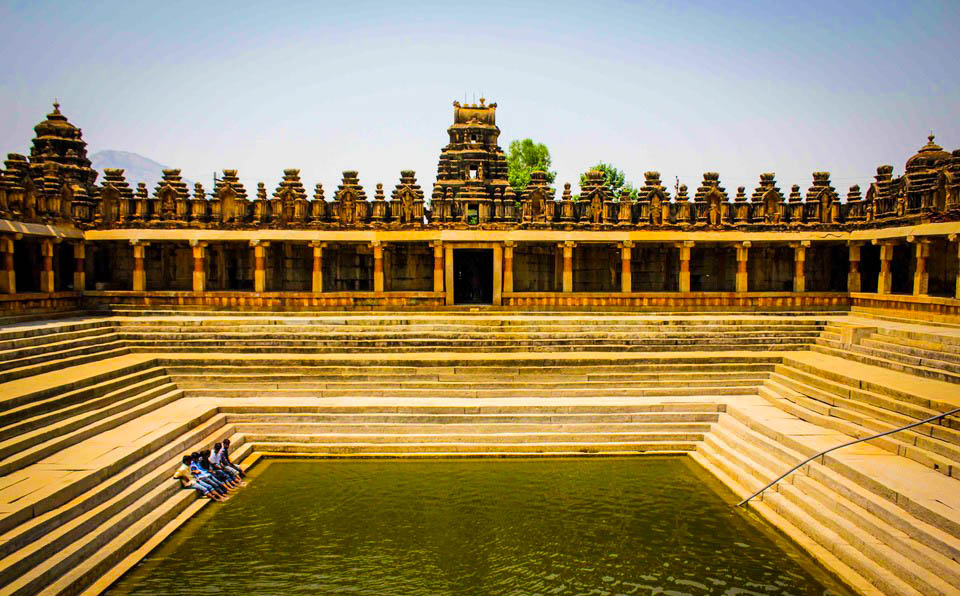 In all our Road trip from Bangalore to Nandi Hills, We never miss to visit this ancient, beautiful temple named Boga Nandeshwara Temple with a breathtaking pond.

Many go on one day trip from Bangalore to Nandi hills for adventurous trip, for trekking with groups.

Not all of them know about this ancient temple which is picture worthy from all the angles. The majestic pond is this temple’s highlight. One must visit this temple to witness the beauty and vast history behind its architecture.

Bhoga Nandeeshwara Temple is located at the foot of Nandi Hills Bangalore, approximately 15kms away. Not to confuse this temple with Yoga Nandeeshwara temple a.k.a Nandi Temple located on top of the hills. But there is a connection between these two temples which many of us don’t know.

Since it represents a departure from the married life, there are no festivals celebrated in Yoga Nandeeshwara temple.

Note: This Nandi Hills temple is not the same “Nandi temple” in Mysore.

In Bhoga Nandeeshwara temple you can see childhood form as “Arunachaleswara” shrine located on the south, youth form located on the north. (Both are beautiful majestic Shiva Lingas with individual Nandhi guarding them).

In Between “Arunachaleswarar” shrine and “Bogha Nandeeshwara” shrine is the “Uma Maheswara” shrine where Lord Shiva is married to Goddess Parvati, sitting on their Vehicle Nandhi. You will be amazed looking at the ornamental pillars which are small but breathtakingly beautiful. Scroll down to see the pics below.

Also there is a Kalynai / Pushkarni (temple pond) adjacent to the temple, a very beautiful pond which attracts hundreds of visitors for its exotic design, artistic appearance and its cultural heritage. It is also called Shringi Theertha, Myth says that it was created by Nandi and it is also the source of South Pinakini (South Pennar) River.

(Note: this pond pic is from internet search since it is beautifully captured than my mobile phone)

Update (14th July 2019) – Since last year we click pics from the Canon EOS 800 D DSLR camera we bought in 2018 for our long bike trip. Also we carried our personal phones whenever we couldn’t take out the DSLR or no space in luggage. Rajesh carried One Plus A6010, and whereas I carried Samsung galaxy S7. Got to tell you my Samsung pics were no good compared to the clarity of One plus. Decided that when I upgrade my phone, I would definitely go for the One plus only.

Road Trip From Bangalore to Nandi Hills – How To Reach

Nandi Hills Bangalore is the most preferred choice for one day bike trip destination by bikers.

It is such a beautiful sight to watch many bikers parading in small or big groups to Nandi hills.

With approximately 70 kms distance from Bangalore to Nandi hills, you have smooth NH 48 roads for seamless drive for the entire 2 hrs of drive. You might experience a slow traffic until Kempegowda Airport on weekdays, especially on Saturdays. Sundays are the most peaceful days.

The distance from Bangalore airport to Nandi Hills is 47 kms distance, which is the most greenery roads.

There are also bus facilities from Bangalore to Nandi hills, and from Nandi hills to Bogha Nandeeswara temple.

Thanks to “Archaeological survey of India”,  this famous Nandi Hills Temple is well maintained all the times.

Read – Kolar is another best place for one day road trip from Bangalore.

If you like to go trekking to far places from Bangalore, you could go either go Coorg or Talakona forest and waterfalls or Yercaud.

10 Things to do around Nandi Hills

After a couple of bike ride to Boga Nandeeshwara temple, we went one step ahead and visited multiple places far apart from this temple in one day.

On 5th November 2016, We went on One day bike trip to the very famous Lepakshi Temple (Anantapur District, Andra Pradesh) after visiting Boga Nandeeshwara temple. I suggest travelling to Lepakshi Temple, which is one of  the best one day trips from Bangalore within 150 kms.

That day alone we rode bike for 300 kms on up and down journey. One of the memorable adventurous bike trips ever because we have traveled up and down two different states in one day. Good news is Lepakshi temple is just 76 kms away from the Nandi hills.

Read – How to Travel to Hampi by Train From Bangalore.

Here are the 10 things to do Around Nandi Hills Bangalore

Watching sunset and going on a trek are the most common things people would do in Nandi hills, here are the other things you could do.

As I mentioned earlier, road trip from Bangalore to Nandi hills is always a pleasant experience for us riding among agri fields.

One day trip or a short trip, Nandi Hills Temple is one of the best nearby places in Bangalore to visit on weekends.