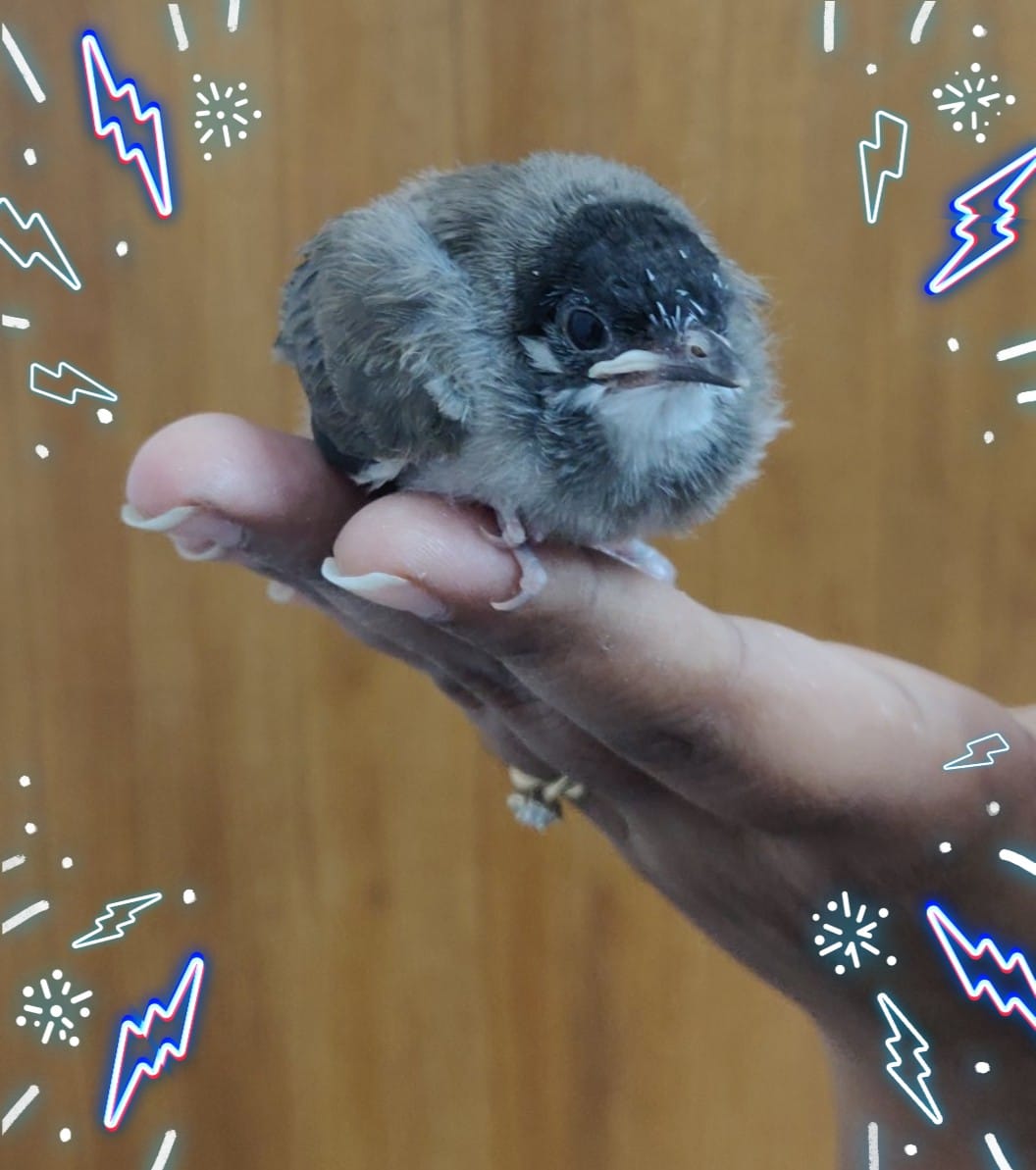 This is a story of a rescued baby bird fallen and injured in our home balcony. And how we took care of it after with medicine and strength training before reuniting with its parents.

The reason I mentioned “My rescued Baby bird” is because Rajesh did not come near that Bird at all. Except for clicking a couple of pics and just one time when we had to take the bird to the Vet.

Read about a tiny, cute little Red Whiskered BulBul Baby bird – a singing bird, which we rescued from our garden balcony, in Bangalore.

I have written a very detailed story here in an intention to cherish the memory forever. So, if any time you feel bored of the lengthiness of my story, feel free to turn to the next one.

And yes, this story has a happy ending.

How We Rescued this Baby bird

About My Apartment Garden – Small intro

It is always a pleasure to watch the Red Whiskered BulBul bird build a nest on our garden gate. The garden gate is a collapsible grill gate which separates our balcony and the sky open garden.

Our garden has a couple of flowering mini trees and many ornamental plants, both kept in soil and pots.

But that’s not the very reason they are attracted to my home. Not even for the tray of water I regularly keep out for birds (that invited yet another regular guest – cat, an ungrateful soul poops on my grass sometimes 🙁  ).

Well, not for trees, not for water, not for a couple of grasshoppers and insects my garden has to offer.

But for the location you see. It takes just 2 second bird flight distance from its home tree, situated just across my apartment wall. Where atleast 3 dozen Red Whiskered BulBul birds make home of that tree. And I can proudly say atleast a dozen of them were born in my garden.

Well, the reason is this. My garden balcony makes a perfect territorial hideout where its enemy “spotted blue bird” – atleast 10x bigger in size cannot find its nest’s location.

Also, my balcony gives them a perfect “bird view” to babysit / egg sit even from quite long distances. I don’t know how they do it, the minute I step out onto the balcony, they always arrive in a jiffy to show they have eyes on me.

These little lives never ceased to amaze me.

Also Read – Facebook Showed Me This Memory from 4 yrs Ago

The Rescued Baby Bird’s Parents Are Not Experienced

All the couples who built their nests in our balcony were amazing, hardworking and dedicated parents you see.

Some parents lay 2 eggs, some lay 3, depending on their parenting experience I guess.

While I am writing this article, yet another couple has started their family already. I can tell that they are experienced parents from the look of its tightly weaved nests.

But the rescued baby bird’s parents were inexperienced. I could figure out not just from the number of eggs, but from the display of its messy nest. For sure they are ‘new parents’. And somehow clumsily covered it by torn polythene bags which gave a meagre support.

I am always curious to watch these birds growing in my balcony, and this time looking at the modern house made of plastic, my curiosity had no boundary.

Finally, parents were successful hatching 2 eggs after a week of relentless hard work.

Myself and hubby were excited for the new arrivals and they became the top discussion during our every day morning coffee.

In Fact we even moved our bed near the balcony, so we can ‘baby watch’ them through the glass balcony doors.

My hubby was pretty sure the fledglings would leave the following weekend just like the previous batch chicks did.

He loves to make these guesses you see.

Apparently he would have been right if only those naughty fledglings waited for a day.

On 8th May 2020, those 2 fledglings fell down from the top. It was the siblings’ fight that made them fall down on the ground along with the nest.

Obviously parents were more shocked than we were, fluttering wings and making stress calls to protect them from the exposure.

What seemed like an eternity, soon those fledglings recovered from the shock, moved to the corner as guided by the parents.

What was more shocking is that when we saw one fledgling kept pushing the other one. It was aggressively blocking the other so as to seize all the food from its parents.

Around 4pm, we were relieved to find them on the garden lawn just outside of the balcony gate. They were taking conscious little leaps by being extremely aware of the new world.

The aggressive one was the first to move towards the tree, and the other one was shy and nervous to take the steps. Little did we know that time is that, it was suffering from the injured pain from falling down.

From our previous experiences, the fledglings usually leave the nests in the morning, and fly to their parents’ home tree only by late evening. Until then, the parents keep feeding them tirelessly and fiercely guarding them from the predators.

Until late evening, the shy baby bird was not making much progress. Sat on the alovera pot , exhausted. All the while, the aggressive baby made progress just like any other normal baby bird would do and had successfully fledged with its parents.

During late evening, we bought the shy baby inside home, with an intention to protect it from the cold air and our apartment stray cat.

It slept tight until I woke the baby the next day morning. Such a little adorable baby. It was so cute to see it sleep with head tucked between its feathers.

The next morning we kept the Raybaby in the same place where we found it last night.

Its parents were very early and kept making stress calls until they saw the raybaby.

We expected that it would fly with its parents soon any minute.

Despite all its desperate attempts to fly, atleast 100s of times every day, it could not bring itself to move its right side of the body. Only its left feathers were actively flipping, and had absolutely no problems with walking at all.

It was very painful to watch its desperate cry to get its parents help, whenever its parents were around to feed. Needless to say, parents too, tried its best luring Raybaby into flying with all their energy.

During afternoons, Raybaby would go behind any of the aloe vera plant pots on the ground, would stay calm and safe until its parents returned back to feed in the evening.

Soon all the crying and jumping starts all over again.

We and its parents took turns to look after the baby for a couple of days – “them” in the mornings, “us” from the evening till next mornings.

On one particular night, it was looking weak and exhausted. It was so weak, that it could not be able to sit with tight grip, nor flip its feather and make short jumps like it used to do before.

After seeing its poor condition, Rajesh insisted that we take Raybaby to consult the doc.

On 12th May, Tuesday afternoon, we took Raybaby to a vet for consulting, and was relieved to know that it had only minor injury to its feathers.

All that weakness and exhaustion could be due to hurting itself while attempting to fly.

Raybaby was given medicine for a week, one drop of it daily, for 8 days.

While coming back home, we were trying hard to figure how to feed medicine to the babybird since it has never accepted any food from us. But after Vet’s consulting, having waited for a couple of hrs in the queue without food, it accepted sugar water complacently from us.

Guess back and forth travel to doc’s office has made Raybaby super hungry. Soon it started accepting hand fed egg whites, grapes, apples, muskmelons and what not.

Going forward, I kept feeding this baby bird 15 to 20x a day, keeping away from the sun until we were sure of its strength gaining back.

As much as we wanted to ‘baby sit’ this rescued baby bird and keep it ourselves forever, we also wanted the baby to be reunited with its parents for its deserving life.

We did all we could to make it fly, keep it active, practice small jumps by luring it towards food and all the while gaining its trust. It amazingly responded well to my voice, and tried its best to fly and reach to me for food.

The best days in my life were the time when Raybaby climbed onto the bed looking for me (bed on the floor near the balcony) and made serious attempts to snuggle under my neck. Once successfully climbed on to my belly, it would then start crying with an open mouth showing that it was hungry. As if saying to me, “can you see me now clearly huh human, am super hungry”.

Since I am used to this call every 20 mins, whenever I try to ignore its call, it would then proceed to jump on to my shoulder, and would start to peck on my mouth. Until I get up to feed it with muskmelons.

Sometimes she/he fly directly to my kitchen counter, where I usually keep the fruits stock. Then cry from there, looking at me expectantly.

This cry and food drama continues until it falls asleep in the evening.

There were times I would be working in my laptop after lunch, with Raybaby snuggled under my neck comfortably.

Also there were days when myself and hubby would be having evening tea with Raybaby snuggled sleeping under my neck.

We were becoming inseparable.

Late evenings were the most hard times, since Ray was clinging on to my neck, seeking comfort behind my ponytail, and sleeping. I could separate it only when it was super asleep and slowly sneak into a bedroom and leave it in its basket.

The 2 weeks of rescued baby bird in our life was indeed a golden period, turning #2020lockdown into treasurable memories. We took extra care when we released Raybaby into our garden to permanently reunite with its parents. Every single minute we kept watch on which direction it was flying, where it was resting and all.

Because, all these days when we left Raybaby outside to be fed by its parents, parents kept calling the baby to fly. So, in an desperate attempt to fly with its parents, Ray either got stuck in the neighbor’s balcony for the whole day or fell outside of our garden wall in an attempt to fly.

Soon, it gets tired from its weak wings and immobilizes. Also once its first attempt failed, it’s parents couldn’t make it fly high again for another long hrs.

Mostly it was afraid of heights, so kept clinging to our / our neighbours garden area, afraid to jump beyond our tall apartment wall. Just 2 days before it was finally reunited with its family, it was chasten by the enemy “spotted bird”, and was saved by its brave parents.

It landed in our garden again, shaken. I then took the poor baby inside, kept it safe for 2 more days, practiced more heights before leaving it outside again.

Thanks to Raybaby, My life was happy and adventurous all these 2 weeks.

When Raybaby flew permanently with its parents, needless to say I was clearly upset. Yet, happy for the little soul going to its deserving wild life.

In one flick, it flew high confidently to the home tree with its parent.

Wow, It was one of the proudest moments. And I will never forget, ever in my life.