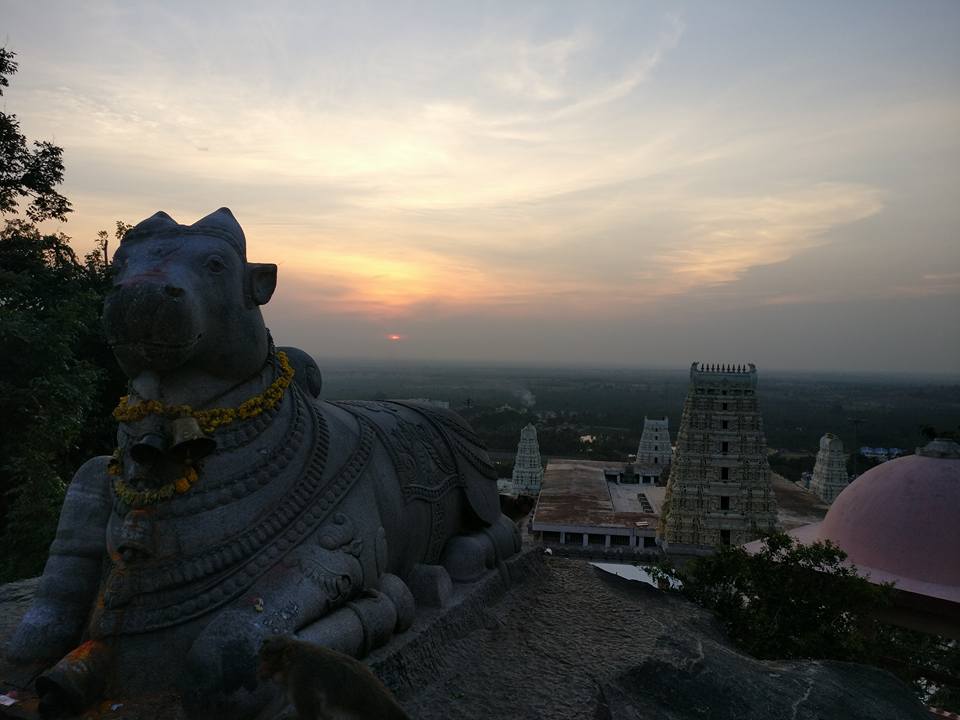 This is our thrilling story of riding motorbike at night among the avenue trees in our 500 kms bike trip, from Bangalore to Hassan road trip.

Two new riders on a bike.

In the pitch dark.

With just a backpack meant for a day trip.

Only tall never ending trees and extremely irritating bugs by our side.

This is our story of thrilling road trip to Hassan in pitch dark, covering 500 KMs under 36 hrs.

Who would have thought we would be riding among the never ending tall trees in pitch dark in our Bangalore to Hassan road trip.

Believe or not it was totally an unplanned journey and we were totally new to that long bike ride too.

In 2016, we were just starting to go out to the nearby places in Bangalore and testing the water.

We were not actually ready to go on long bike rides. We wanted to take it slow after our day bike trip experience from Bangalore to Lepakshi temple. It was quite a successful bike trip – properly planned and executed.

Now we had screwed it.

So, we didn’t have an itinerary laid for this unexpected delay.

Nor any rooms booked.

Above all, no mobile network to book any rooms.

What should have been a one day trip from Bangalore to Adichuchanagiri hills has turned into a 2 days of thriller ride.

A thrilling bike ride at night to Hassan, because we had no other option.

After a long leisure darshan at Kalabhairava temple, sitting on the top of Adichuchanagiri hills late in the evening – we had only two options in front of us.

Go back home riding 135 kms to Bangalore or ride 90 kms to Hassan which is relatively less distance so we can be safe soon?.

As a new bee just started travelling by bike to places, 135 kms seemed like a himalayan distance to cross.

Initially days I had a hard time coping with the cool attitude of Rajesh. He was super cool in everything he did and that includes not bothering about sticking to the time schedule.

In many ways I appreciated his coolness but at times he tested my patience and gave me really hard time. Especially on the days when we had to run a marathon to reach the airport and railway stations. Couple of times we had a history of missing them too.

Soon when we really started loving our bike rides, he couldn’t wait to wake up and get ready before me.

Now, sitting on top of the Adichuchanagiri hills, blaming our “coolness” for not planning the trip well. Meanwhile, we were nervously trying to connect to the network to get a hang of the google map.

By calculating the distances to home and to Hassan from adichunchanagiri hills, and with zero energy to drive , we decided upon the best shortest distance to hit the bed ASAP.

That best decision was to ride to Hassan in the pitch dark.

So we made a hotel reservation at La Flora Pavanputra Resort before we descended down the hill.

We both experienced a chill in our spine when the parking area was completely deserted. The very place was buzzing with lots of two wheeler and four wheeler is now empty.

The small shops selling toys near the temple entrance are now completely covered and locked under blue sheets.

We both exchanged a look, that said “we are totally screwed”.

Though we did not show any concern or fear on the face, we were totally terrified of the situation.

For more than 3hrs, it was a never ending journey among the avenue trees, literally holding the jumping heart in our hands.

Successfully made it to the resort, all in one piece and we couldn’t be more proud.

We appreciated each other and acknowledged that we played good team sports.

Had it been someone else in Rajesh’s place, I very much doubt their behavior in such adverse conditions.

I am pretty sure they never would have exhibited the same level of bravery and leadership. All kudos to Rajesh.

Of various trips and risks we undertook in our bike travel, this Bangalore to Hassan road trip stays close to our heart till date.

Also, this trip brought us recognition as “bike riders” among our friends on facebook.

And Rajesh has got many appreciation for his new milestone of driving 500 kms under 36 hrs.

Soon people started expecting bike travel posts from us during the weekends.

3 Places We Visited From Hassan To Bangalore Road trip

Next day morning, woke up in our room with a grumbling stomach since we had not eaten anything since the time we left the Adichunchanagiri hills. We were just grateful to be alive and having found a hotel room, the thought of feeding our stomach did not occur at all.

Soon we checked out our room right after the complimentary breakfast, for sure we will never return to this anytime in the future.

We rode our bike towards Belur instead of towards Bangalore, to visit this very beautiful -never seen before kind of Hoysala architecture. Not just the architecture is unique, the idols inside the small sanctum are unique too. Along with Lakshmi devi and Kali devi, there were also statues of both Lord Vishnu and Lord Shivalinga guarded by 2 guardians standing tall from floor to the roof.

We reached the temple around 9.40am, and spent till 10.30am. We allowed ourselves inside the sanctum since there was no priest to be seen and the temple gate was not locked.

After darshan, we spent time in the pillar hall, eating the peanut we bought along the way.

Here is some information on the uniqueness of this Hoysala architecture I gathered on the internet.

“There are 92 Hoysala temples in Karnataka. These temples are known to be Ekakuta, Dwikuta, Thrikuta, Chatushkuta and Panchkuta, depending on the number of shrines and towers. This Mahalaxmi temple is the only Chathushkuta temple (four shrines and towers) built in Hoysala Architecture style.

The temple is said to be built in the year 1114 A.D, by Kallahana Rahutha(from Kolhapur, Maharashtra), a wealthy merchant in Hoysala court. The place was called Abhinava Kolhapura, connecting it with Kolhapur”.

Luckily Lakshmi Narasimha temple was open for darshan around 1.10 pm when we reached there. We have travelled about 75kms from where we left, to reach this temple via Hassan – Bangalore highway.  We had spent time till 1.50 pm, the priest left the temple open, closing only the sanctum doors. Main deity of this temple is Lord Lakshmi Narasimha with Lord Krishna in the nearby sanctum.

Around 4.15 after lunch at Bellur cross, we stopped at a very crowded Yediyur Siddhalingeshwara temple on the way to our home. Though it was a small temple with Lord Shiva as the main deity, we spent around 45 mins for darshan since it was too crowded.

We didn’t want to do anymore visiting places or temples anymore since it was already evening and a lesson from the previous day was to start the bike before it’s too dark and too late.

Finally a suggestion to the readers. If you are looking to extend your trip from Hassan, you could go to the following nearby places. Take help of google maps, to find these places.

This was our first experience driving a bike late into the night.

And it was totally an unplanned journey from Bangalore to Hassan road trip.

We totally enjoyed our return journey easing all the tension from the previous night and enjoyed the ride.

It was a total of 256 kms of bike ride from our hotel room in Hassan to our home in Bangalore. And it was a grand total of 500kms bike riding from Bangalore to Hassan road trip.

Till date this trip makes one of the interesting dinner conversations with our friends.

Looking back it was all worth it.